Haldiram Analysis: How the namkeen maker became a household favorite

Haldiram is a no new name to Indian households and families. The brand is highly renowned amongst all classes and sections of the society. The business has grown leaps and bounds through its sheer exemplary efficiency from being extraordinary amongst the ordinary.

The story of the iconic bhujia maker is quite inspirational. It grew from a small namkeen shop in Bikaner, Rajasthan into a multi-billion dollar company. It began in 1918 as a part-time hobby for extra income has today become a behemoth enterprise in the food industry in India generating over to Rs. 7000 crore in annual revenues combining the business of Kolkata, Delhi, and Nagpur Groups

Beginning of the Story and forming Haldiram in 1938 At the age of 12 , when most children went to school, Ganga Bhishen Agarwal spent his days in Bikaner inventing the omnipresent snack Bhujia. Soon Haldiram bhujia became irresistible to customers. The most important changes he made to the bhujia was making it out of ‘moth dal’ Moth lentils rather than besan.

This amendment in delicacy changed his life overnight as moth is very popular and easily available in Rajasthan. He also focussed on making it the fine crispy bhujia we know today transforming it from the fat, slightly bland version from before his time.

The boy in his early days in business also demonstrated a knack for marketing by setting the price point such that the product was more exclusive and not just considered a commodity, selling for 5 paise a kilo as opposed to the earlier 2 paise under his grandfather Bhikharam.

Determined to take bhujia beyond the boundaries of Bikaner, they shifted base to Nagpur in 1970. Their they had opened first full-production unit to introduce a delectable variety of savouries, sweets and beverages to the market. The success of this venture led them to expand and evolve as a brand, that is an integral part of every Indian household today.

Timeline of History and Family Dispute

From Rags to Riches The business that began in a small shop now spans not only all regions of the country, but also marks its presence in international markets. It has a tremendous presence across the globe. In contemporary times, Haldiram products are exported to several countries worldwide, including Sri Lanka, United Kingdom, United States, Canada, United Arab Emirates, Australia, New Zealand, Japan, Thailand, and others. Haldiram boast of its portfolio of over 400 products, ranging from Namkeens and Snacks, Sweets, Refreshment drinks, Frozen foods, Ready to cook dishes and Quick-service restaurants.

Manufacturing Units The Nagpur headquartered company has manufacturing plants in Nagpur, New Delhi, Kolkata, Bikaner. Haldiram has its own retail chain stores and a range of restaurants in Nagpur and Delhi.

Positioning The initiatives undertaken by the company helped Haldiram to uniquely position its brand. Haldiram also gained an edge over its competitors by minimizing promotion costs. Success of Haldiram is a sheer example of ‘word of mouth’ or ‘mouth to mouth’ publicity.

Appreciating the company’s efforts at building a brand, an analyst said, “Haldiram once was just another sweet maker but it has moved into trained brands first by improving the product quality and packaging. Through its clever products and brilliant distribution it had moved into the star category of brands.”

Steps ahead in Leadership In 1994, the unit was awarded the International Award for Food & Beverages by the Trade Leaders Club in Barcelona, Spain. The unit also received the Brand Equity Award15 in 1998.

Manoharlal Agarwal, who played a key role in the success of the Delhi unit, was included in the eighth edition of Distinguished Leadership by the Board of Registrars of The American Biographical Institute16. Haldiram was also admitted as a member of Snack Food Association, US.

From Bikaner shop to French Bakery While largely remaining closely guarded from the prying eyes of the public, Manohar Lal Agarwal and his brother have been pushing boundaries in the business. The recent venture with the second largest bakery chain in the world, Brioche Dorée, is proof that Haldiram is set on broadening their reach. For the first time, the bakeries will only be serving vegetarian food tailored to the Indian market.

Similar to PepsiCo in the past, breakfast products giant Kellogg’s has also recently shown interest in partnering with or buying a stake in Haldiram (Nagpur and Delhi enterprises), valuing them at $3 billion.

Pricing Haldiram charge a decent premium owing to the branded and well packaged products. They give a huge importance to good presentation and lively packaging as a way of differentiation from other non-branded unorganised products and thus demand a premium for it. But since the premium is so small that consumers usually don’t mind given the trusted high-quality products.

At the same Haldiram, is facing stiff competition from other branded competitors like Bikaji, Lehar, Bikano etc. Thus the pricing has been the key factor contributing to their success. Thus competitive pricing is the backbone of its marketing mix business strategy.

To charm the more price sensitive customers, Haldiram has come up with small one-time consumption packages of 40 grams which are priced at Rs. 10 for its most famous Bhujia. Company has introduced different products under various weights, which have different pricing.

Marketing Strategies: From the initial days onwards Haldiram never invested much in Marketing and advertising to expand his brand they gained their business majorly through word of mouth. But now due to the intense competition, they realized the importance of marketing and advertisement and started gaining attention from them.

One of the major recent campaigns is with  Haldiram tied up with a Bollywood movie under Rajshri production ‘Prem Ratan Dhan Payo’, starring Salman Khan and Sonam Kapoor. It launched a contest for promotions through which they distributed 1.5 crore packets of snacks.

The family business of Haldiram is divided into 4 main entities having businesses in North India, South & West and East Market and having combined revenue in excess of 7000 crores. Below, we are analyzing the financials of one of the group company called Haldiram Snacks Private Limited having business in the North Indian markets. 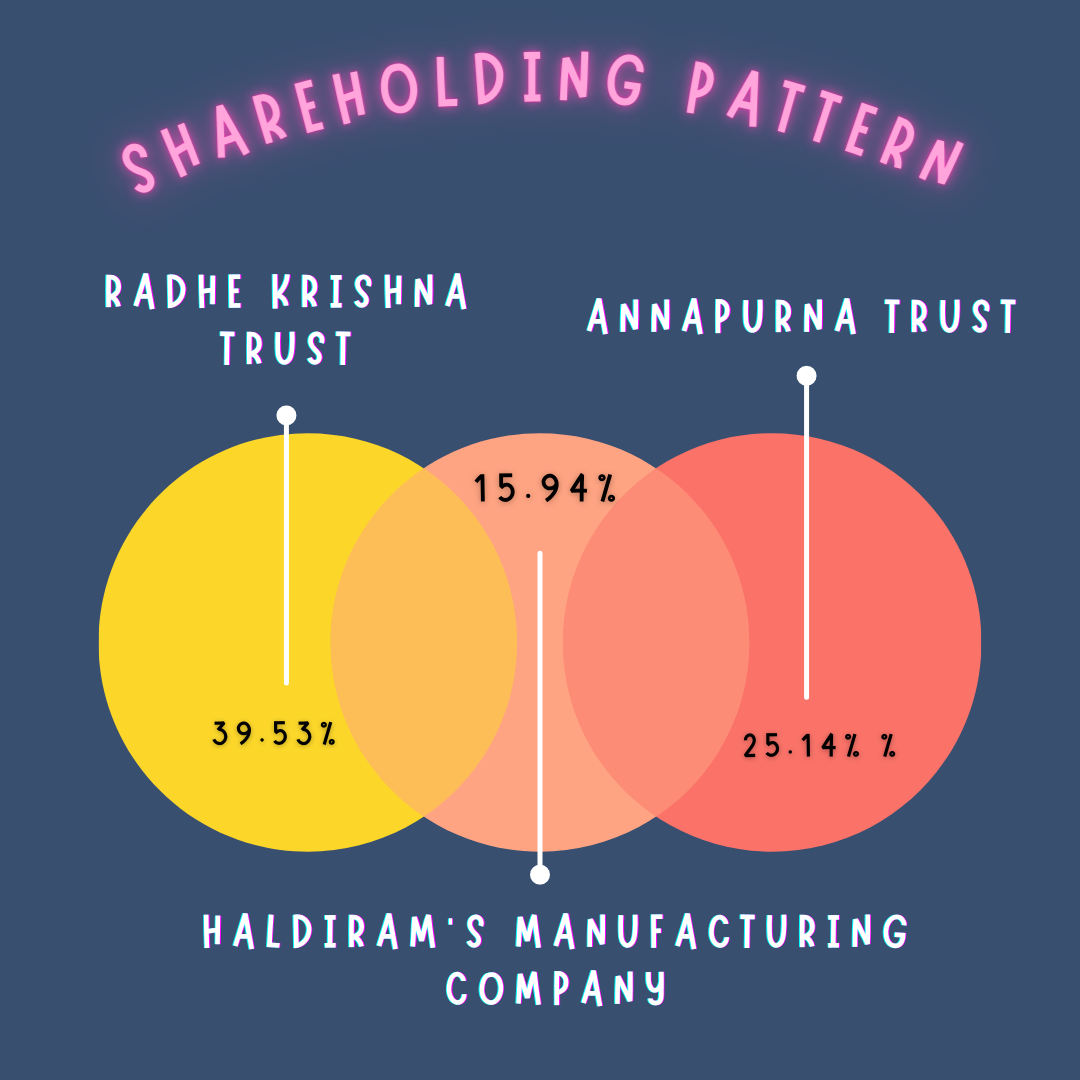 The sales of the company have been rising consistently from year 2015 to 2020. The total revenue during the period has surged up to 115% to Rs 3,801 crore from Rs 1,769 crore. The operation profit margin has remained in double digits, barring year 2016.

The company has witnessed a consistent rise in Profit after Tax (PAT), which increased up to 150% between 2015 to 2020. The company generated a PAT of Rs 128 in 2015 and Rs 318 in 2020. The net profit margin has remained near double digits during the period under review. 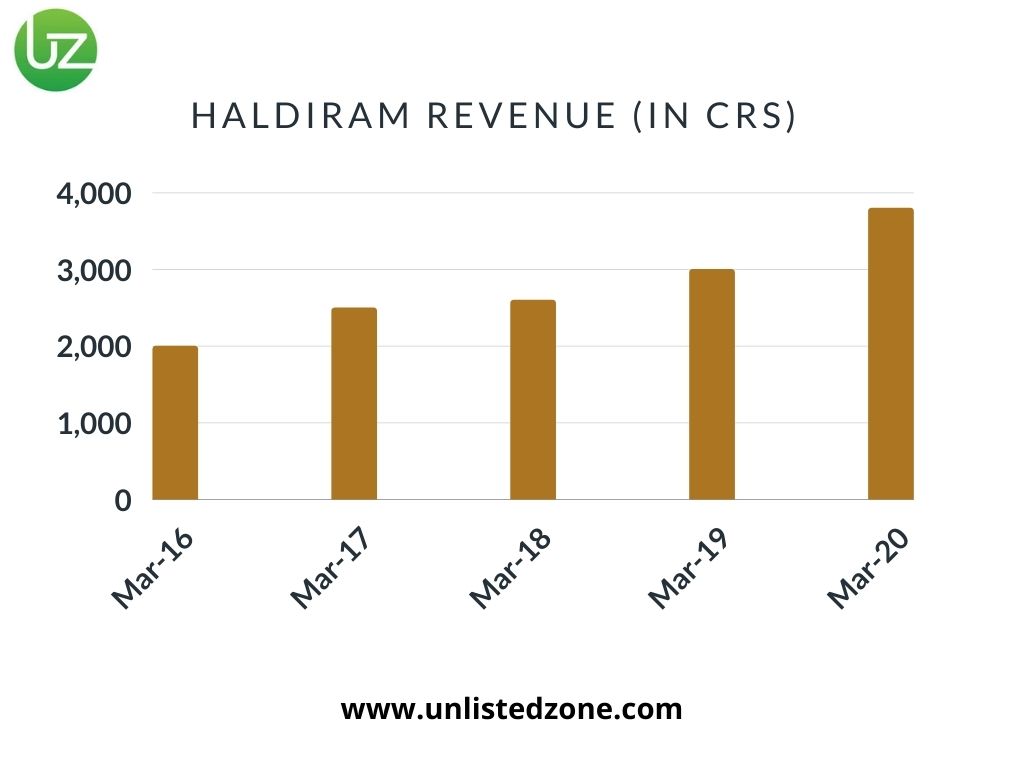 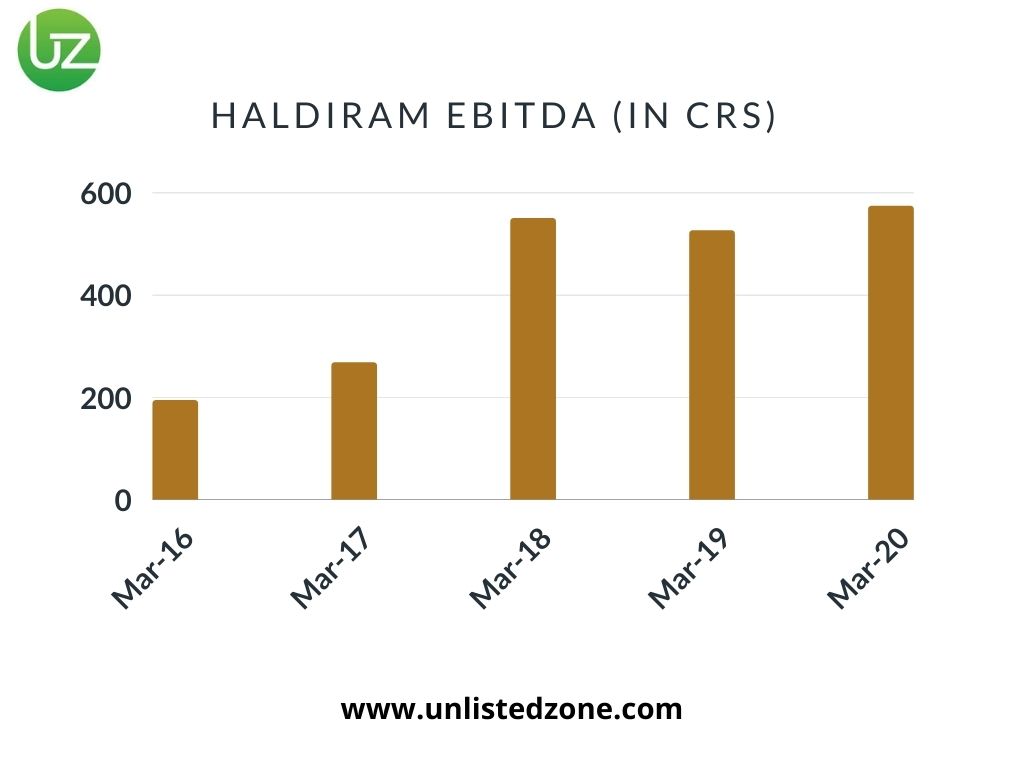 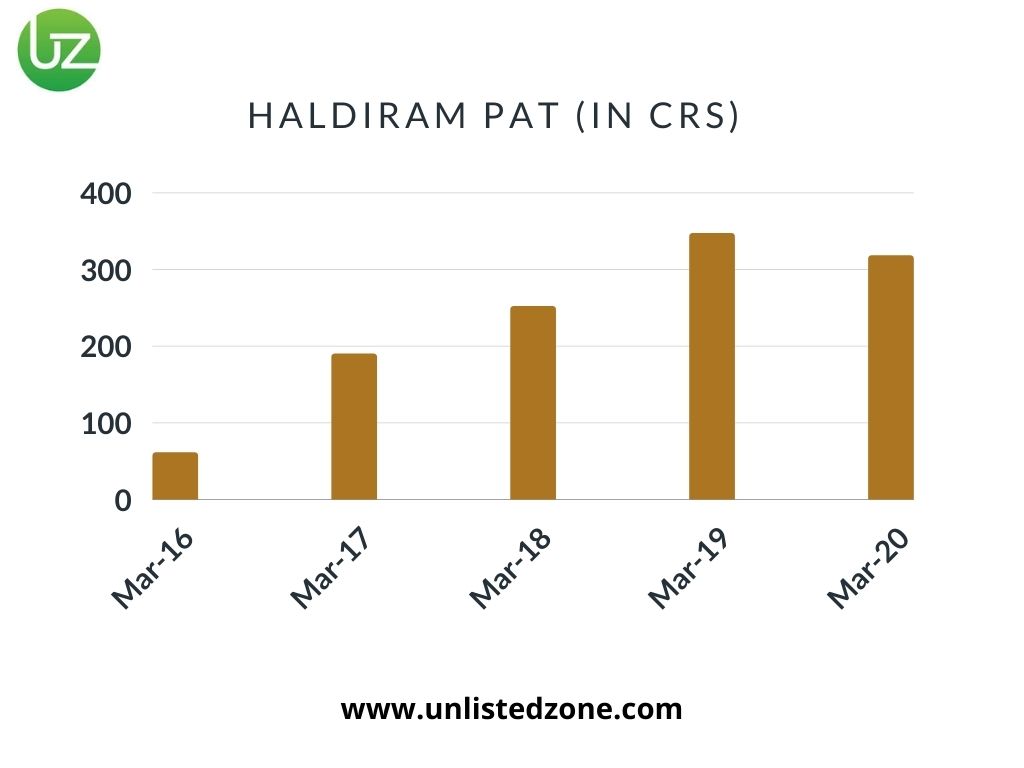 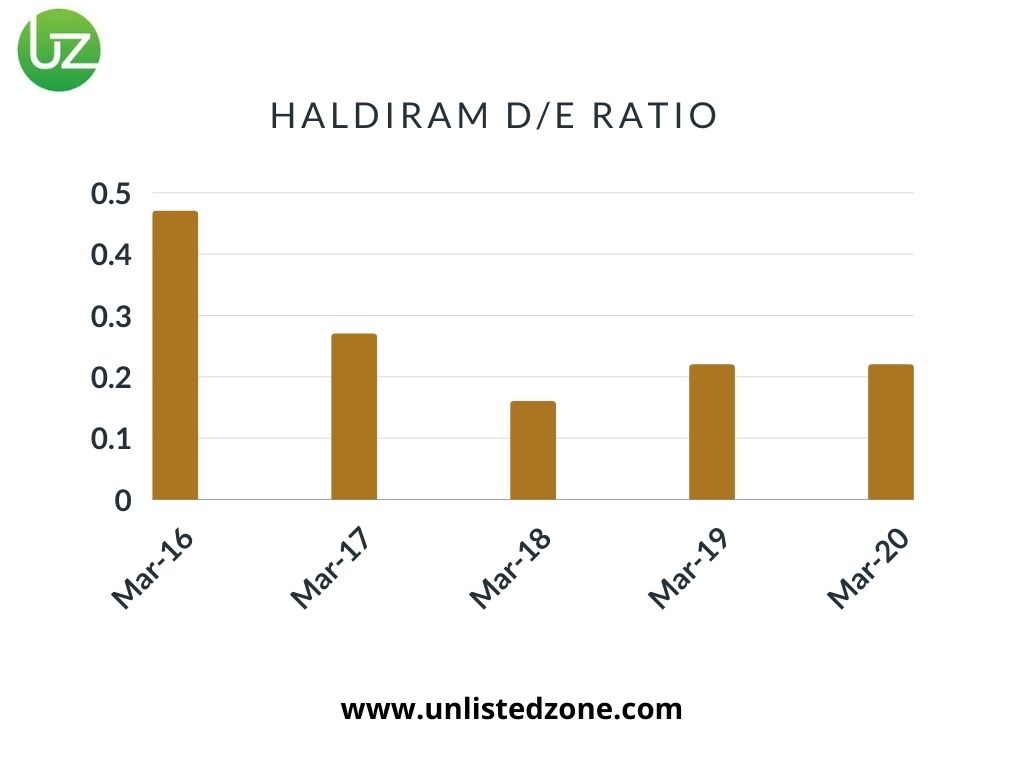 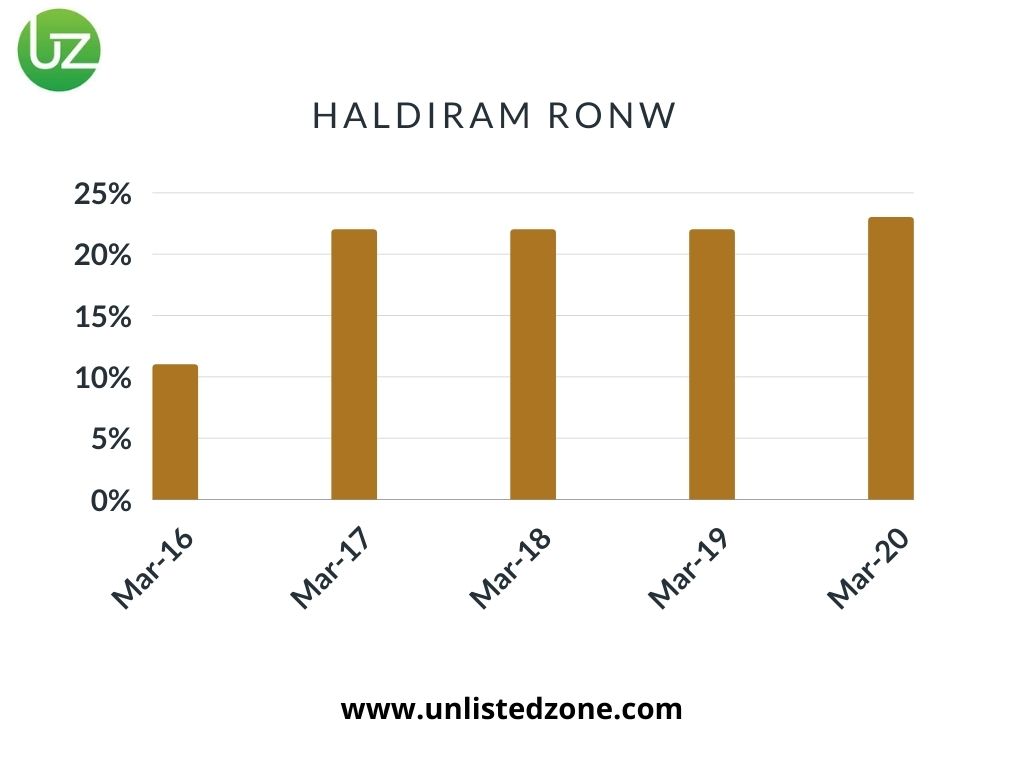 In 2019, Kellogg had made an interest in the growth story of Haldiram and at that time it was valued at $3Billion of the whole group. However, things didn’t work out due to some complications in the business structure of Haldiram and the ongoing dispute in the court. Kolkata Group has taken Delhi and Nagpur entities to the court for the fight of brand ownership and trademark.