(iii) It also deals in all types of spares and components required by the gas industry, viz., valves, cylinders, regulators, liquid containers, etc.

(iv) Premier Cryogenics is a professionally managed company. It is listed with the Calcutta Stock Exchanges as a public limited company. Reputed institutions like NEDFI(North Eastern Development Finance Corporation Ltd.)  & AIDC( Assam Air Products Private Limited) are among the shareholders of the company.

(v) At present, the company’s main focus is in the NE region and the nearby states. However, the Company proposes to venture into new and diversified areas and expand its business pan India in the years to come.

The company has two manufacturing plants;

1. One is located at Guwahati in the North-East part of India. The state of the art plant at Guwahati has been in operation since 1996.

2. A second plant at Samaguri which is operational since 2018. With this new plant, the total installed capacity for Oxygen and Nitrogen gases, which contributes more than 50% in revenue of the company has become more than double its existing production capacity.

With the new plant, the Company could meet the needs of a variety of industrial gas consumers mainly from the core sector oil industries, Research laboratories, Railways, Food processing, Infrastructure, and Health care sectors.

A subsidiary of the Premier Cryogenics

The company has one subsidiary named PCL Power Private Limited. It has started in the year 2018.  The objective of forming a subsidiary is to venture into the business of generating power by procuring Natural gas from the OIL sector companies and utilize the same for captive or group captive consumption. 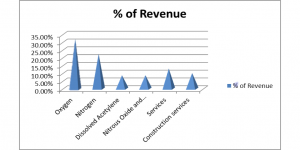 Future Plans of the Company

Gas business- The company overs the years has built its capacity to cater to the growing demand for industrial gases in the future. For that, the company has recently commissioned a new technology Oxygen/Nitrogen unit at Samaguri in the Nagaon district of Assam.

Gas Construction business- The company has also entered into construction projects in the gas sector across the N.E. Region and beyond to diversify its business portfolio. The company is expecting a growth in the demand for construction of the gas plants in the future.

The Company is presently catering to about 70% of the market demand of the NE region which is mainly from the aforesaid consuming industries. With the improvement in the general economy, better industrial climate, and upcoming projects in the infrastructure, power, and other core sectors, the Company expects significant growth in demand in the industrial gas market in the years to come.

(i) Its main products, Oxygen & Nitrogen are produced by atmospheric air separation having no raw-material cost.

(ii) The Company’s existing facilities being located at Guwahati, the hub center of the region, and the new unit at the nearby area of Samaguri in middle Assam; it enjoys comparatively lower freight costs and stable power supply.

(i) The manufacture of O2/N2 is critically dependent on power. Any disruption may affect the business. And moreover, any increase in tariff will increase the input cost.

(ii) The Company supplies gases mainly through open tenders which are subject to market competition.

(iii) The Company enjoys benefits relating to tax refunds and other incentives as per the Government Industrial policies. Any change in policy will affect performance.