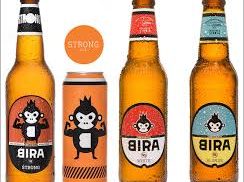 (i) Established in the summer of 2015 by B9 Beverages and headquartered in New Delhi, Bira 91 has quickly become the rage amongst urban millennials owing to its delicious beers, bold identity and a strong draft network.

It is crafted with the creative urban drinker in mind — someone who likes to have fun and doesn’t take life (or beer) too seriously, the brand aims to disrupt the global beer world with 21st-century technology and its playful monkey mascot.

In 2017, Bira 91 leaped across to New York City to begin its campaign in the United States.

In 2018, the brand started on its wider expansion in the Asia Pacific market by entering Singapore.

In 2019, Bira beer clinches ICC sponsorship deal for five years, making it the first Indian beverage brand to strike a global sponsorship deal with the cricket governing body. They featured in ICC world cup 2019 in England.

Sports marketing experts estimate the size of Bira 91’s sponsorship deal to be $5-6 million per year. The brand will benefit through this partnership as India will host two big-ticket events, including the Cricket World Cup 2023 and T20 World Cup 2021.

(ii) It is one of the fastest-growing beers in the world, Bira 91 has built a strong portfolio of essential beers and aims to drive the global shift in beer towards more color and flavor.

In less than three years, Bira 91 is now in the top 25 craft beer brands worldwide by sales volume and the fastest-growing beer brand in the world (growing 5x in 2017).

(iii) The company now operates two breweries in India and has offices in nine cities including New York City.

(iv) It has a passionate team of over 350 beer lovers who have only one goal – to change the world of beer and beer for the world.

Bira 91 is backed by Sequoia Capital and Belgium’s Sofina Capital.

Bira 91 to date has raised close to 518 Cr and counts celebrities Farhan and Zoya Akhtar and film producer Ritesh Sidhwani along with Flipkart’s CEO Kalyan Krishnamurthy, Sequoia Capital among its investors.

Bira 91 last raised $50 million, announced in May last year, at a reported valuation of around 1470 Cr.

Please find below the procedure for buying B9 Beverages (Bira Beer) Unlisted Shares at UnlistedZone.

Important Note: Please note that the lock-in period for selling B9 Beverages (Bira Beer) Unlisted Shares is 6 months after listing. Hence you can’t sell B9 Beverages (Bira Beer) Unlisted Shares which you bought in Pre-IPO for 6 months after its listing. i.e. You can sell it only after 6 months calculated from the listing date. For any queries, please contact us at sales@unlistedzone.com

Please find below the procedure for selling B9 Beverages (Bira Beer) Unlisted Shares at UnlistedZone.

Note: The price at which we are buying the share is fixed for 3 days. If you cant sell your stock within 3 days, then the price of that day will be applicable when we receive shares in our demat.

This new SEBI rule was introduced in the month of August-2021, wherein the SEBI has reduced the lock-in period previously from 1 year to 6 months to encourage more and more funds to be invested in startups which are going to public or IPO in near future. Reduction of lock-in is seen as big step and after that many PMS funds are advising their clients to invest in Pre-IPO shares to get the benefit of early stage investment.

DIS - Delivery Instruction Slip is the way through which an investor can sell or transfer the B9 Beverages (Bira Beer) Unlisted Shares from his/her demat account to any other demat account. There are two Types of DIS Slip.

Read our article to understand more about this. https://unlistedzone.com/how-do-i-sell-my-unlisted-shares/

In the last 4-5 years, the unlisted share market has become quite big and as a result of that, the ticket size has reduced from usual 5-10 Lac to 35-50k in today's scenario. So, via our UnlistedZone platform, if somebody wants to buy B9 Beverages (Bira Beer) Unlisted Shares then minimum investment would be 35-50k.

Yes, buying and selling of unlisted shares in India is 100% legal.

If you sell your shares within 2 years, then you will have to pay Short-term Capital gain on unlisted shares. Short-Term Capital Gain is added in your Income. So, as per individual tax slab you need to pay capital gain tax.

If you sell your shares after 2 years, then you will have to pay Long-term Capital gain on unlisted shares LTCG is 20% with indexation benefits.

If you buy B9 Beverages (Bira Beer) Unlisted Shares from UnlistedZone then these shares can checked in two ways. However, before we tell you the process of checking of shares, it is intimated that as per SEBI regulations, the shares can be transferred in demat account only.

The B9 Beverages (Bira Beer) Unlisted Shares are credited in demat account same day of transferring funds in our company's bank account.

The price of B9 Beverages (Bira Beer) Unlisted Shares can be checked in two ways. First, you can join our telegram channel where on daily basis we share the latest prices of all the unlisted shares in the morning and secondly, you can register on UnlistedZone.live platform to see the historical graphs and prices of all the shares at one place.

If you see the thesis of investment in the unlisted shares then it is being done mainly to take the advantage of IPO market. And, if the IPO plans of company get delayed due to market conditions or any other reason then demand suddenly drops in the market. The unlisted market works mainly on demand and supply and if there is no IPO news then getting exit would be difficult.

"UnlistedZone is India's fastest and leading marketplace to buy and sell unlisted shares. In the last 3 years, we have already served more than 1 million users on the platform. The total transactions value done from the platform is already more than 100 Crores. The name of our Co-founders Mr. Umesh Paliwal and Dinesh Gupta publish regularly in leading newspapers like MoneyControl, Business-Standard, ET etc for their views on IPO and Unlisted market. In the last 3 years, UnlistedZone has made a good name for itself in the industry and gained a trust of their users. So, the new investors should not be worried about any kind of fraud that is mostly happens with unkown brokers in the market while doing investment with UnlistedZone."

We at UnlistedZone do the valuation based on 2 methods.

We source shares either from the employees or initial investors looking to liquidate their B9 Beverages (Bira Beer) Unlisted Shares.

Pre-IPO shares means which are planning for an IPO in near future. So, all the shares which are traded on the platform are not Pre-IPO Shares. However, if the company's business is going good and then demand will always be there in the unlisted space, so even if the IPO does not come, the investors can easily liquidate their B9 Beverages (Bira Beer) Unlisted Shares in the unlisted market itself.

Rules and regulations of SEBI are applicable in the Unlisted space like lock-in period of 6 months, paying of Stamp Duty, and DP Charges for every transaction etc. However, to become an unlisted broker there is no such regulation by SEBI as of yet.